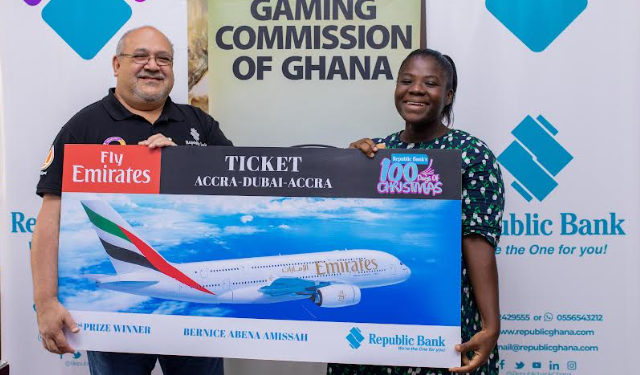 Bernice Amissah, a customer of the Cape Coast Branch of Republic Bank won the grand prize of a fully paid expense trip to Dubai for two in the Final Republic Bank Christmas Loan Campaign Promotion Draw.

Bernice Amissah and two other lucky grand prize winners had their prizes presented to them at a short ceremony held at the Head office of Republic Bank, Ebankese.

The three big winners were;

Six other customers of the bank won TV Sets in the first draw of the CLC Promotion held in December last year.

Speaking at the presentation of prizes event, the Managing Director of the Bank congratulated the winners of the CLC promotion and expressed his satisfaction with the process. According to him, the CLC Promotion was added to the Loan Campaign to put smiles on the faces of the customers of the Bank.

“Today, we have seen and experienced the surprises, joy and smiles on the faces of our cherished customers. This is our joy as a Bank; a happy Customer, a happy Bank,” Mr. Antar added.

The Managing Director also thanked the Gaming Commission for their partnership and the independent work done in the selection of the award winners. He assured customers of the Bank of more exciting offers and promotions.

Speaking on behalf of the award winners, Bernice Amissah, the overall winner of the fully paid expense trip to Dubai for two, thanked the Bank for the kind gesture and the reward. According to her, she thought it was a scam when she initially had the call from the Gaming Commission. However, her branch, contacted her to confirm the reward to her.

“This is going to be my second honeymoon and I am so grateful to Republic Bank,” she added.

The Christmas Loan Campaign (CLC) draw was supervised by the Gaming Commission of Ghana.