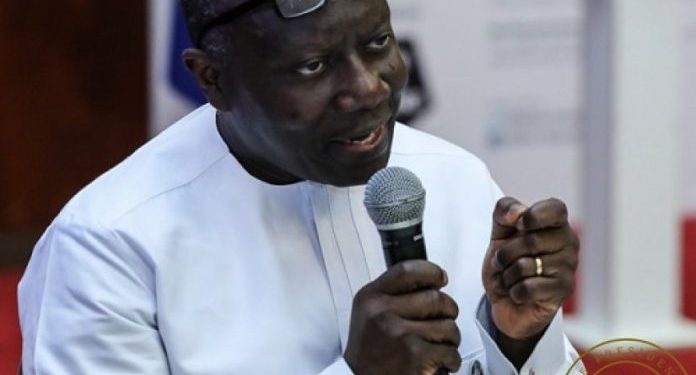 The Finance Ministry seems to be making some final considerations to the E-levy as it failed to present the Electronic Transaction Levy (e-levy) Bill for consideration by the Finance Committee in Parliament.

The E-levy Bill was expected to be laid before the Finance Committee in Parliament on Friday, December 17, 2021, after Speaker Alban Bagbin referred it to the Committee for further deliberations.

Officials from the Finance Ministry were to appear before the Committee and interrogated on the E-levy Bill.

However, that was not to be so as officials from the Finance Ministry failed to appear before the Finance Committee with the Chairman of the Committee, Kwaku Kwarteng announcing to the members that government has pulled the brakes on the E-levy.

“We just finished the Finance Committee meeting, we did two agreements. One loan agreement for the purchase of aircraft for military training, the second has to do with the World Bank facility for the mining sector. We were expected to consider the e-levy and to determine the way forward. Mr. Chairman just announced that we are unable to take the e-levy today.

As Parliament is expected to rise on Friday, John Jinapor said the Committee would have to wait for direction on the way forward.

Since it was proposed, the e-levy has engendered agitations from the Minority and other stakeholders as it is deemed to have the potential to worsen the economic hardship in the country.

The Ministry’s decision to pull the brakes on the E-Levy bill follows the assertion made by the Deputy Minister for Finance, Abena Osei-Asare, that progress has been made in the ongoing consultations with regards to the proposed E-Levy.

The Deputy Minister said this ahead of the laying of the E-Levy bill in Parliament this week as the house is expected to rise on 17 December 2021.

She noted that the consultation process will influence the outcome of the final tax instrument that will be laid in Parliament.

Speaking on the sidelines of the Public Accounts Committee sitting on Tuesday, December 14, Mrs Osei-Asare disclosed that concerns of Ghanaians have duly been considered in the bill and its ready for laying.

“I believe that we will bring the bill in and hopefully, all things being equal, it will be laid in Parliament, and all of us will see everything stated clearly in the electronic transaction levy (E-Levy).

“You can never finish consultations, so I cannot say consultations are over, but we have made very good progress in the consultation process and I believe that it will reflect in the bill that we will be presented to Parliament,” she said.