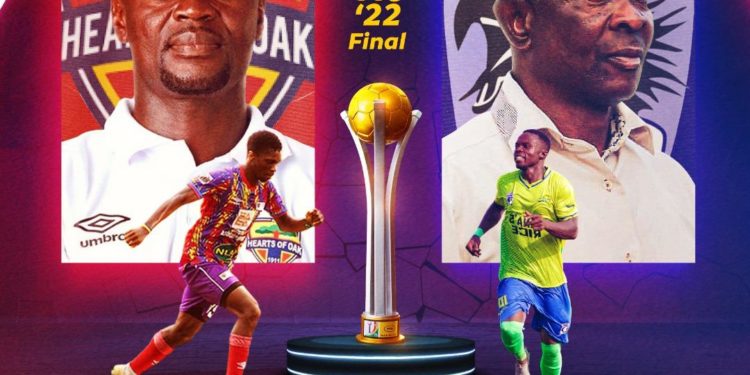 Hearts of Oak and Bechem United will go head-to-head in the final of the 2022 MTN FA Cup at the Baba Yara Stadium on Sunday, June 26.

The Phobians are looking to defend the title they won last season having beaten AshantiGold on penalties while Bechem too are hoping to replicate the success of 2016 when they defeated Okwawu United.

The road to the finals did not come easy for both teams with Bechem United having to overcome five teams while Hearts breezed pass four teams in the process of securing a final berth and an opportunity to defend their title.

After a disappointing title defence in the Ghana Premier League this season, Samuel Boadu and his men will hoping to win something to redeem themselves but that  not come easy as they will be going head to head with one of the best performers in the league this season.

Hearts placed sixth in the just ended in the GPL with 48 points while while Bechem United placed third with 54 points.

Road to the Finals

Hearts started their title defence at home against Golden Kicks in the round of 32.

The Rainbow club saw off their opposition with a convincing 5-2 scoreline to progress to the round of 16, where they were drawn against Elmina Sharks.

Sharks held Hearts to a 2-2 draw in regular time before losing 7-8 on penalties.

Hearts’ next in the quarterfinal stage of the FA Cup managed a narrow 1-0 win over Division One League side, Skyy Football Club.

In a cagey contest in the semifinal, they proved superior over Dreams FC in a 3-2 win at the Accra Sports Stadium to earn a spot in the final.

Bechem started their FA Cup run from the round of 16, where they managed a 2-1 victory over AshantiGold away from home. The Hunters then needed penalty shootouts to edge out Bibiani Gold Stars in the round of 32, after playing out a 1-1 stalemate in regular time.

4-2 wins over Kumawuman United and Tamale City in the last 16 and quarterfinal respectively meant that Kassim Mingle’s side booked a place in the semifinal of this season’s FA Cup.

In what was expected to be their toughest game, Bechem United saw off the challenge from Aduana Stars with a 2-0 scoreline at the Nana Fosu Gyeabour Park to advance to the final.

In the last four games involving these two teams, Bechem United have no wins while Hearts have picked up two wins, with the other two ending in stalemates.

The former Inter Milan midfielder will not be part of the team traveling to Kumasi for the game against Bechem United at the Baba Yara Sports Stadium.

Muntari since joining the club mid-way in the season has only played one away game at the Tamale Sports Stadium against Real Tamale United.

Defender Robert Addo Sowah also returns to the squad after being sidelined due to injury.

Bechem United will be coming into the game with guns blazing as target Augustine Ocran, Clinton Duodu and Emmanuel Avornyo are available for section.

Coach Kassim Ocansey Mingle will have his captain and commander of the side Kofi Agbesimah and young sensational defender Kofi Owusu taking charge of affairs at central defence.

The winner of the competition will represent Ghana at the 2022/2023 CAF Confederations Cup.