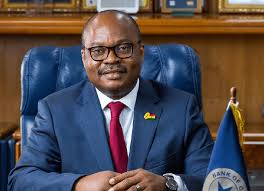 Governor of the Bank of Ghana (BoG), Dr Ernest Addison, has described as baffling the upward trend in the country’s headline inflation rate from single digits last year to double digits this year.

According to the Governor, the rise in inflation is a surprise to the Central Bank given the 5.4% GDP growth rate recorded at the end of 2021 despite the Covid pandemic and subsequent increments in the monetary policy rate by the Bank.

Speaking in an interview with Bloomberg monitored by norvanreports, the Governor described the country’s current economic environment as a complicated one.

“Inflation was single digits at 7.5% last year and then a year later it is high and in double digits, it’s now a very complicated environment seeing that Ghana was able to weather the Covid pandemic without recording a negative growth rate in 2020 and in 2021 the economy picked up well and recorded 5.4% growth rate.

“For us at the Central Bank we anticipated the growth rate and so increased the policy rate in November last year by a 100 basis points and we were rather surprised by the inflation rate which came later on in February particular which triggered the 250 basis points increase in the policy rate,” he noted.

“The MPC will be meeting and I do not want to pre-empt the discussions and decisions that will take place as well as the outcome, but really it’s a complicated situation and we will take a decision on what to do with the current policy rate of 17%,” the Governor added.

The Central Bank on Monday, May 23, 2022, is expected to announce a new policy rate.

Given the rising rate of inflation, the new policy rate to be announced is expected to be an increase on the current policy rate of 17%.