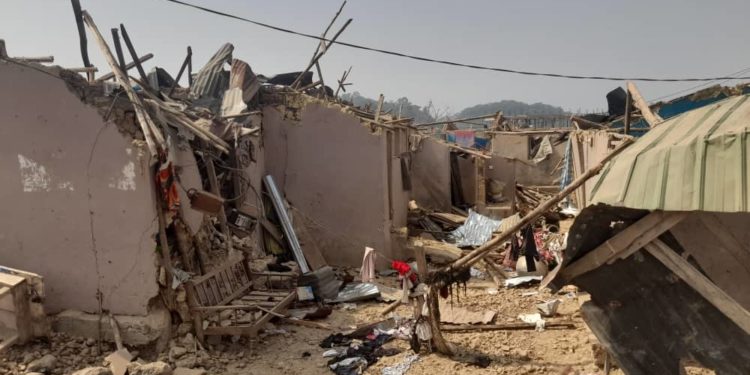 Operational activities of Maxam Company Limited – the company believed to be the transporter of the explosives that caused the Appiatse explosion – has been suspended by the Minerals Commission.

The suspension of their operational activities follows a directive from the Lands and Natural Resources Ministry to have the company’s registration with the Minerals Commission suspended.

“Thereby precluding the company from the manufacture, transportation and /or supply of explosives for mining operations, pending the outcome of the investigations into this matter,” read parts of the statement issued by the Ministry of Lands and Natural Resources.

Additionally, the statement noted that, the Chief Inspector of Mines at the Minerals Commission, Kofi Adjei, has been interdicted with immediate effect pending the outcome of the ongoing investigation into the incident.

Read details of statement below:

Read: 3 hospitality centres shut down over failure to pay GHS 600,000 in tourism levy

Meanwhile, Chief Executive of the Africa Institute of Extractive, Dr. Toni Aubynn, says tougher sanctions could be taken against Maxam Company Ltd if safety was comprised.

“They have been very careful importing these explosives, I don’t know exactly what happened, why this occurred and why it occur at where it occurred. It is something that needs to be investigated and if there were short comings they must be brought to book.

“If it was just an accident, yes, it was terrible but it was not intended. But if it was an act of negligence, there must be some action”, he said.

Meanwhile, Chirano Gold Mines Limited has clarified that they are not directly involved in the explosion of the mining explosives at Appiatse which has claimed 17 lives and injured 59 others.

According to the company, they were neither the handlers nor transporters of the materials which caused the unfortunate incident.

Speaking in an interview, Communications Officer of the Chirano Gold Mines, Kwabena Owusu-Ampratwum, however, admitted that they were the recipients of the materials which were being supplied by one of their suppliers.

According to the Communications Officer, the transportation and handling of the materials are the responsibility of the suppliers and not the company.

“It wasn’t Chirano Mines that was transporting the explosives or handling the materials. It were goods that our suppliers were transporting to be supplied to us. It was one of our suppliers who was bringing the materials but unfortunately got involved in an accident. So the transportation and handling of the explosives were being done by the supplier,” Kwabena-Owusu Ampratwum explained.