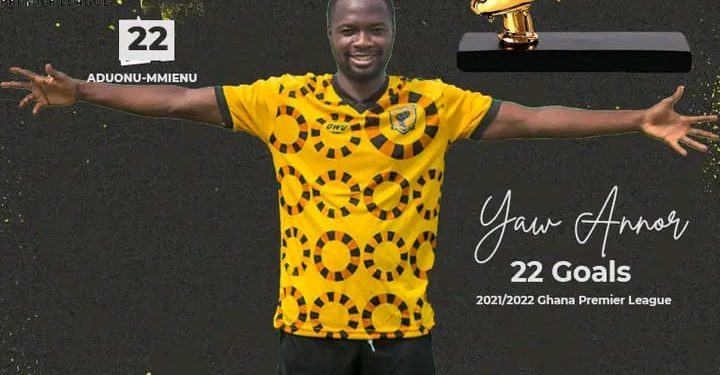 Yaw Annor scored twice to win the 2021/2022 GPL top scorer as AshantiGold were held to a 2-2 draw in Bibiani against the Gold Stars on the final day of the Ghana Premier League.

His two goals against Gold Stars saw him eclipse Etouga as the league’s top-scorer for the 2021/22 season while also ensuring he equalled Ishmael Addo’s record of 22 league goals in a single campaign, the most by any player in the Premier League

Having scored 20 goals, Annor was just a goal behind Asante Kotoko’s Franck Mbella Etouga heading into matchday wit the Kotoko striker failing to score in the last game against Accra Lions on Saturday.

The 24-year-old opened the scoring in the 23rd minute of the game before adding a second on the verge of halftime..

The game in Bibiani ended 2-2 as the Miners mounted a spirited comeback after recess with a brace from Joshua Akoto.

Annor’s first-half brace against Bibiani Gold Stars has thrown the record out the window, bringing his season total to 22 goals.

With Annor winning the top-scorer award, the search for a first foreign winner of the prize continues with Etouga narrowly missing out on the tag.

AshantiGold ends the season in 7th with 47 points, 20 points behind champions Asante Kotoko but will be optimistic of playing in the top division next season after they were banned to Division Two, being found guilty of match manipulation.