Benchmark Value: IEAG threatens to pull out of stakeholder consultation meeting with gov’t 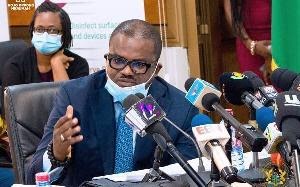 Benchmark Value: IEAG threatens to pull out of stakeholder consultation meeting with gov’t

The Importers and Exporters Association of Ghana (IEAG) has threatened to pullout from the consultative meeting with government on the implementation of the benchmark values should the Minister of State at the Finance Ministry, Charles Adu Boahen chair the committee.

The IEAG’s threat follows the statement made by the Minister during the investiture dinner of the Association of Ghana Industries (AGI).

According to the Executive Secretary of the Association, Samson Awingobit, the statement made by Mr Adu Boahen shows open support for the AGI on the reversal of the benchmark value policy of some selected items. This he says, has compromised him ahead of the consultative meeting.

He noted the Minister cannot chair a meeting that he has already taken stance for, adding that such statements should not be made by a statesman and as such the President should call him to order.

“Before we will excuse ourselves, we will ask him to excuse himself first because he has taken his stance. So he cannot chair a meeting when he is biased towards us. So he will have to excuse himself first and if he is dreaming of becoming a chair of that meeting and make such pronouncement and making such reckless statement by not engaging stakeholders and going to the other group and start making such statements. We strongly believe that his statement is biased and it does not deserve to come from a statesman like him, the President should call him to order because he is creating a problem now,” he added.

Meanwhile, the Importers and Exporters Association of Ghana (IEAG) has described a statement by the Minister of State in charge of Finance Ministry, Charles Adu-Boahen, at the investiture of the newly elected President of the Association of Ghana Industries, as unfortunate, deceptive, prejudicial and a show of gross bias towards the ‘benchmark values’ policy implementation.

Read: We stand by content of leaked letter – NIA

Mr. Adu-Boahen said at the event that government will take a final decision on the benchmark values by end of January 2022.

“I am happy to let you know that there are continued engagements, with stakeholders ongoing. Please, do not give up. Let us persevere and I am sure we will find ourselves with some good news before the end of the month [January 2022] with regards to the Benchmark values”, the Minster was quoted to have stated among others things.

This the Importers and Exporters Association of Ghana (IEAG) in a statement said is unacceptable.

“We at the IEAG deem this statement by the honorable minister Charles Adu-Boahen as unfortunate, deceptive, prejudicial and a show of gross bias towards our course in the matter of the benchmark values policy implementation.”

“The secretariat of the IEAG would want to put on record that since the announcement of the indefinite suspension of the implementation of the reversed 50% benchmark values policy by government, no stakeholder engagement has taken place between the IEAG and government”, the statement said.

“Also, the IEAG can state unequivocally that none of its sister organizations including the Ghana Institute of Freight Forwarders (GIFF) and the Ghana Union of Trade Associations (GUTA) have been consulted on the way forward on the issues”, it added.

The IEAG are therefore demanding that the Minister of State at the Finance Ministry be made to recuse himself from any stakeholder engagement on this matter going forward.

It also want an immediate retraction of the said statement by the minister, adding “any attempts by government to take sides on this matter would be fiercely fought against by the business community.”

It concluded that the IEAG and its allies remain opened to participating in a fair and transparent stakeholder engagement with government devoid of biases in order to resolve this issue to a logical conclusion.