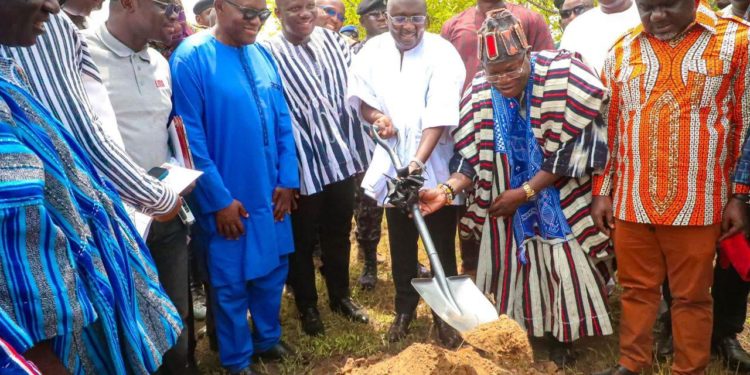 The Vice President, Dr. Mahamudu Bawumia, has cut the sod for work to begin on the construction of the first Inland marine port in the northern part of Ghana and an accompanying Industrial Park at Debre in the Savannah Region.

The multimodal transport corridor, known as the Trans-Volta Logistics Corridor, is being undertaken by LMI Holdings and involves the development of a system to transport containers and bulk cargo from the Port of Tema to Burkina Faso and other landlocked countries via the Volta Lake.

An additional port, to be constructed at the termination point of the Tema-Mpakadan railway line, will facilitate the embarkation and disembarkation of cargo from Tema and Debre.

Speaking at the sod-cutting ceremony on Friday, July 22, 2022 Vice President Bawumia underscored the importance of the project, especially for the movement of goods, cross border trade, and preservation of Ghana’s roads.

“Easing the congestion of clearing goods from Tema will be one of the main objectives for this port and industrial park. Using the Volta Lake, vessels will transport goods and containers in transit to and from the Tema Port. These containers will be moved by rail to Akwamu-Korankye (Eastern region) and then loaded onto barges to the Debre Inland Port. In Debre, operating at its fullest capacity like Tema with all the attendant facilities, containers will be offloaded and put on trucks to continue their journey further into the sub region. All services such as customs, transits clearances will be provided as pertains to any international port.

“This $200 million inland marine port and the $250million Industrial Park will address a myriad of issues that continue to plague the movement of goods in Ghana and to our neighbours in the sub-region. Most of the over 30,000 trucks, annually, moving goods to landlocked countries of the northern boundary of Ghana will be taken off the roads. The total monetised benefit for the intervention encompasses a reduction in generalised cost, comprising vehicle operating cost, travel time, carbon emission, reduction in transportation cost and reduction in post-harvest losses,” he stated.

The greater part of the inland transport in Ghana happens via lorries, with the road transport system taking up 96% of freight and 97% of passenger traffic. This heavy reliance on roads for the transport of goods from the Tema port to Ghana’s landlocked neighbours has had a punishing effect on our roads, leading to shorter lifespans and concerns with safety.

“The investment in Inland ports offer superior logistics, the opportunity of large warehouses, proximity to rail and highways, ample truck parking, less traffic congestion, and economic incentives. It is estimated that each barge trip from the inland port, will take over 300 trucks off our roads. This monumental intervention will reap major savings on road maintenance. It will reduce the incidences of fatal road accidents that we, unfortunately, too often read and hear about in the media.”

Dr Bawumia emphasized that industrial parks, such as the one at Debre, signal business readiness in any given context, serving production and manufacturing needs for mutually beneficial businesses and industries.

“The availability of subsidized service and infrastructure such as roads, electricity, energy, water supply, and telecommunication services is a competitive standpoint, attracting international and foreign investors. For a growing economy, likes ours, Industrial Parks are a requirement for our industrialization. The Dawa Park by LMI and the Tema Free Zones Enclave are a testament to this.

“As witnessed with the Tema Port and the attendant booming of factories and other economic activities, the opportunity for Debre’s holistic economic growth is about to take off. Debre’s geographic positioning makes it significant for the Inland Port and the Industrial Park to be sited. The deep depth of the Volta Lake year-round offers all-seasons availability for barges for transportation to and from Debre. With the creation of auxiliary roads, linking Debre to other towns, it will become a hub that will attract other stakeholders in the ecosystem to set up other complementary facilities and businesses.”

“Let me congratulate LMI Holdings for this impressive feat. As a company, LMI comes to this project with a plethora of experience in infrastructure development. With over $450 million in assets, this Ghanaian conglomerate has interests in construction, industrial utilities, property, and logistics. In the last 20 years, since LMI Holdings developed the Special Economic Zones, over $3.4 billion of foreign direct investment has been contributed to Ghana’s economy.”

Present at the ceremony were the Minister for Transport, Hon Kwaku Ofori Asiamah; Minister for Lands and Natural Resources, Hon Samuel Abu Jinapor; Director General of the Ghana Ports and Harbours Authority, Mr. Michael Luguje; and representatives of the governments of Burkina Faso, Mali and Niger.