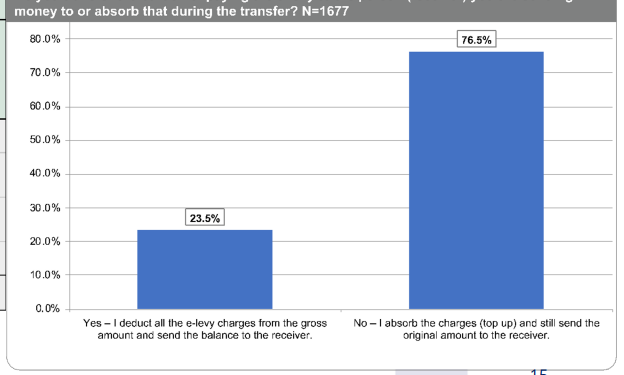 This is against some seventy-six percent (76.5%) of businesses that have decided to absorb the cost of the levy, thereby shielding consumers from bearing the tax.

This is according to the recent survey by policy think tank, IMANI Ghana, which revealed that 32.8% of all digital transactions in the country are undertaken for business purposes, that is, payment for goods and services.

Payment of government services and personal needs accounted for 9.4% and 55.3% of all digital transactions in the country.

Factors identified as reasons for the non-support of the levy include wasteful expenditure by government, little accountability for the use of existing taxes and the over-taxing of the general public.

Data presented by IMANI Ghana on the back of its study, further reveals that given its current tax rate of 1.5%, more than 72.6% of the general public are unwilling to pay the levy.

Some 19.8% of the general public are however, willing to pay for the E-Levy given that the tax rate falls to below 1%.

The resistance against the implementation of the E-Levy by the Ghanaian populace is evident in the low revenue mobilised from the levy in the last two months.

Reports indicate that government has so far been able to raise a total of GHS 60m in revenue from the levy in the last two months against the target of raising some GHS 600m – a meagre 10% of the total target.

The low revenue mobilised from the levy can be attributed to a significant number of users of digital platforms (43.8%) reverting to using cash for transactions whereas 20.7% of users are exploring loopholes in the tax system to avoid paying the levy.