FIFA WCQ: Thomas Partey to miss out on Ethiopia game 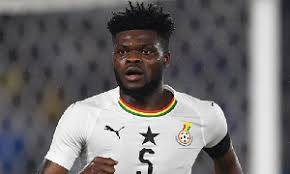 FIFA WCQ: Thomas Partey to miss out on Ethiopia game

Ghana faces uncertainty about the availability of midfield dynamo Thomas Partey for their crucial upcoming 2022 World Cup qualifying fixtures against Ethiopia and South Africa, as the player has had to sit out Arsenal’s Premier League clash with Watford on Sunday.

On the back of a run of successive games for The Gunners and having seemingly put behind an injury plague that blighted his performances last season, the 28-year-old was a surprise omission as Arsenal announced their team news for the Watford showdown, revealing the absence is a result of a “tight groin”.

Partey, 28 will however join the Stars for the final game against South Africa which appears to be the decider as to who qualifies from Group G on November 14.

The vibrant midfielder missed Arsenal’s game against Watford as a precautionary measure after he revealed some discomfort in the build-up to the matchday.

After talks between the Ghana Football Association and Arsenal, both parties agreed for the player not to play the first of the two matches which is against Ethiopia.

Thomas Partey recorded a goal in each of Ghana’s doubleheader against Zimbabwe.

Ghana will be hoping to qualify for the playoffs as they currently sit second, with a point behind South Africa.