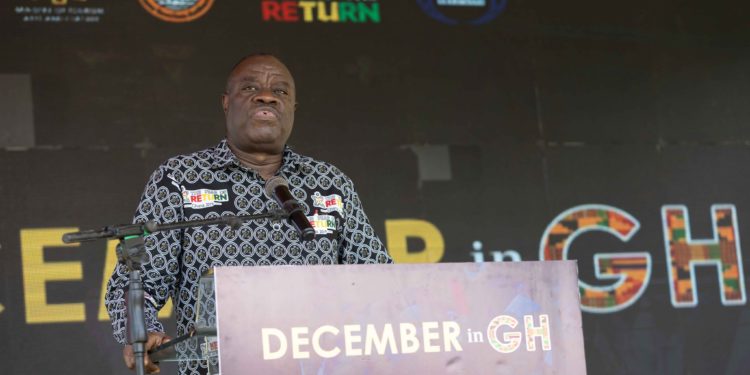 Ghana has launched this year’s edition of its flagship tourism product, ‘December in Gh’ – an initiative which has seen the country become the leisure and merrymaking epicenter of the world since its inception.

Introduced in 2019, the programme has come to promote Ghana as a December holiday season destination, not only for the Ghanaian diaspora, but for the global diaspora family.

December in Gh features a series of concerts, fashion shows, traditional cultural festivals, private parties and a lot more across multiple regions of Ghana which are endorsed by the Ghana Tourism Authority (GTA) through the Beyond the Return Secretariat.

December has helped shore up international arrivals, tourist expenditures and stimulating the economy.

GTA CEO, Akwasi Agyeman at the launch at the La Palm Royal Beach Hotel yesterday, August 4, said “the success of December in Gh is unprecedented and has been an important part of not only boosting the economy, but also branding Ghana as the go-to destination in December and subsequently, the rest of the year. With our engagement with our hotels and tour operators, we know that many have booked groups far in advance.”

The Ghanaian authorities are looking for increased numbers from this year’s December in Gh.

“We anticipate that December in Gh for 2022 will become a record-breaking year as more travelers take the journey to Ghana,” Tourism, Arts and Culture Minister, Dr. Ibrahim Mohammed Awal said.

He expressed optimism that the draw of December in Gh will help the country achieve its target of one million international arrivals for 2022.

“Available data indicate that the first half of the year has recorded over 400,000 international arrivals against a target of one million for the whole of 2022. Considering the fact that the second half of each year is the peak period for international arrivals, the target of one million tourists would be achieved. Events such as AfroNation, Afrochella, Esssence among others would help drive tourists to Ghana,” Dr. Awal emphasized.

Also present were over 80 members of the National Association for Advancement of Coloured People (NAACP) led by its President Derrick Johnson who was presented with a citation honouring his effort at helping members reconnect with their ancestral roots.

There was a food fair with an assortment of indigenous foods from all over the country on display for consumption and a cook-off competition involving some local celebrities.

The full list of activities and events for this year’s December in Gh is expected to be announced in the coming weeks by the Ghana Tourism Authority and the Beyond the Return Secretariat.