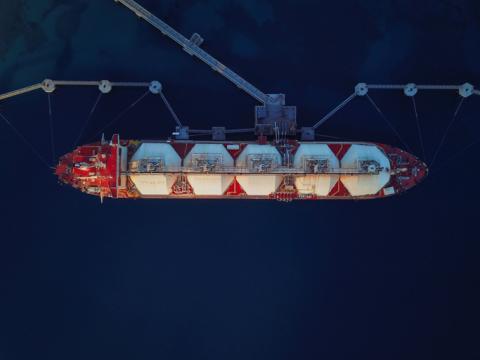 Commercial operations at the heavily delayed Tema LNG import terminal are now expected to start-up in Q2 2022, which will position Ghana as a net importer of LNG.

According to reports in January 2022, shipments of LNG are expected to flow to the 2.0mtpa terminal by June 2022, having been severely delayed due to the Covid-19 pandemic.

Risks of further delay are notable, given the amount of false hope given to the project’s start-up date in recent years – the operator of the terminal, the Tema LNG Terminal Company (TLTC) indicated in January 2021 that the facility would be online by end-Q121, a timeline we were sceptical of, given Ghana’s previous history of undermined LNG projects and operational hurdles.

Fitch Solutions forecast Ghana’s net imports of LNG to reach 0.3bcm and 1.0bcm in 2022 and 2023 as the facility comes online, jumping to around 1.9bcm by the end of our 10-year forecast period to 2031. In May 2018, Ghana National Petroleum Corporation signed a cooperation agreement with Russia’s Rosneft to supply 1.7mtpa of LNG over 12 years.

However, it has since been announced that Shell will supply LNG to the facility. Shell and the TLTC have entered a 17-year terminal use agreement, where Shell will process up to 1.6mtpa of LNG through TLTC and then sell the processed natural gas supply to the GNPC under a gas sales agreement. The terminal will have the capacity to import around 2.0mtpa, which means that an additional 0.4mtpa of supplies will be open to negotiation or left free for spot deliveries.

Plans are consideration by the Ghana National Petroleum Corporation to re-sell LNG throughout the Sub-Saharan Africa region, however, we remain bearish on these re-export plans due to the costly infrastructure needed to be constructed across the region. According to an interview featured in Bloomberg in January 2022 with the manager of GNPC Hamis Ussif, the company plans to re-export LNG in order to position Ghana as an energy hub for the region.

Under the plans, GNPC will buy LNG from the Tema facility and then transport it throughout SSA via pipelines, barges and trucks. While we forecast rising demand for gas across SSA over the long term, there remains a widespread lack of gas import, transport and storage infrastructure across the region. Indeed, Ghana and Cote D’Ivoire are the only two countries expected to be net importers of LNG during our 10-year forecast period to 2031.

Other markets across SSA either meet gas demand through their own domestic supply, or simply lack the necessary infrastructure for importing gas, meaning SSA’s gas demand will remain constrained until this dynamic can be shifted through new investment across the region. Consequently, Ghana’s re-export project will require a substantial amount of new infrastructure to be constructed across the SSA region, which is both costly and requires a substantial amount of time to build.

Benin was cited in the interview as a market that has already shown interest in buying LNG from Ghana, in order to increase its gas supply. However, Benin has been struggling for several years to get proposed plans to build an LNG import terminal off the ground, thus currently lacks the infrastructure to import any LNG.

TotalEnergies signed an agreement in 2019 to develop a floating, storage and regasification unit (FSRU) in the country. The agreement covered imports from 2021, at 0.5mtpa for 15 years, to supply a new 127MW power station. However as of January 2022, the government has yet to fully commit to the project, which casts major doubts on its progression and consequently, on the viability of Ghana re-exporting its LNG to Benin anytime soon.

We expect that any potential re-export volumes will remain small, on both a regional and global scale, due to Ghana’s own need for domestic LNG as well as the constrained demand for gas in the SSA region. One option for re-exporting LNG is through the delivery of LNG via trucks. Land-locked Burkina Faso has been targeted as a potential market that could see the delivery of LNG from Ghana via trucks coming inland.

These markets seek to expand their gas supply in order to serve the power sector, which are otherwise dependent on other forms of energy, such as solar or oil-fired power. However, given the nascent (to non-existent) gas economies present in these markets, any demand for Ghana’s LNG that materialises over the near-to-medium term will likely be of very small volumes.

Furthermore, Ghana still requires gas for its own domestic use, which will limit the amount of LNG available for re-export across the region. We forecast a robust uptick in Ghana’s natural gas consumption over our 10-year forecast period to 2031, averaging 5.9% y-o-y to reach 5.88bcm from an estimated 3.3bcm in 2021. This will be driven by strong demand from the power sector, which accounts for the vast majority of the country’s gas consumption.

Historically, Ghana has imported all of its gas via the West African Gas Pipeline (WAGP) from Nigeria, however, pipeline imports have proved volatile and the availability of gas has been falling over recent years, partly due to increased domestic demand for gas from Nigeria as well as issues with the Volta River Authority – Ghana’s purchaser – meeting payments.

Pipeline imports have a cost advantage over its LNG counterparts, however, the Tema LNG facility can provide Ghana with a reliable supply of gas that is not dependent on feedstock constraints in Nigeria and the WAGP. Indeed, contracted supply from Shell’s global LNG portfolio means that the risk of supply disruption to the terminal is very low, which marks a significant advantage for Ghana’s future energy security.