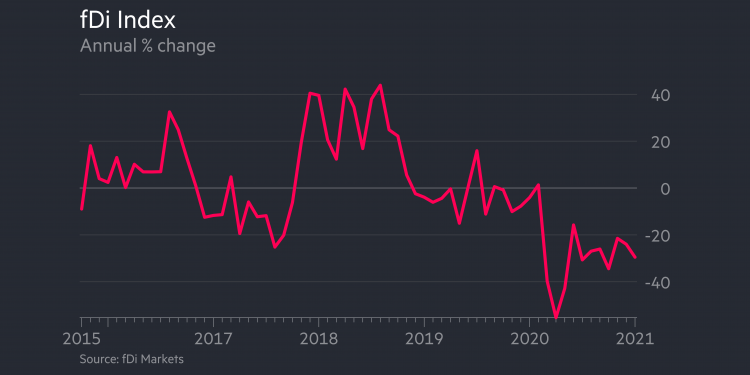 Global investment has carried 2020’s weak momentum into the new year, although the real estate sector is showing early signs of renewed activity as the global economy tries to shrug off the Covid pandemic.

The fDi Index — which tracks foreign investors sentiment — stood at 607 points in January, down by 29.5% from the same month of 2020, according to figures from greenfield investment monitor fDi Markets.

The IMF expects the global economy to bounce back and grow by 5.5% in 2021, according to the latest World Economic Outlook. While global investment takes longer to realign to the economic cycle — Unctad still expects foreign direct investment to fall by 5% to 10% in 2021 — fresh capital is flowing into major cyclical sectors, such as real estate, as investors seize the opportunities arising from recovering global demand.

Canadian Epta Development Corporation acquired 100 acres of industrial land in south-west England hosting an old pharmaceutical complex, to redevelop it into a logistics and warehousing park.

Also in the UK, Singapore-based GLP announced construction on one million square feet of warehouse space in four sites across the country. In the US, California-based Majestic Realty struck a deal with the council of Laredo, Texas, for a $1bn, 2000 acre logistics and business park.

At the same time, General Motors set aside $800m to turn a Canadian SUV plant into a facility producing electric delivery vans.

US investors have appeared quicker in reigniting their investment campaign after the hiatus caused by the Covid-19 crisis, although their focus has mostly fallen on the domestic market.

Traditionally the main source of global capital, once again they announced more investment projects at home (187) than overseas (157), thus continuing a trend that emerged throughout 2020, fDi Markets figures show.