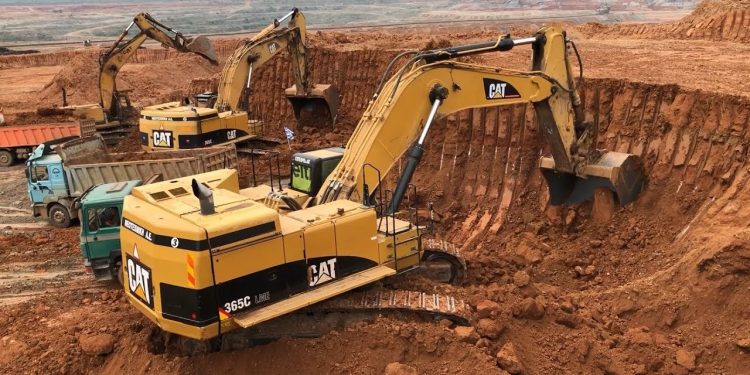 The Ministry of Lands and Natural Resources has once again announced that the government from January next year will fix tracking devices on all mining excavators.

The Deputy Minister of Lands and Natural Resources George Mireku Duker, noted that the Minerals Commission has created a situational room to monitor the activities of excavators to ensure that their operations are within certified mining concessions.

The government has intensified its fight against illegal mining by adopting technological innovations to monitor mining equipment and concessions.

According to him, a tangible explanation will have to be given out before the excavator will be re-activated otherwise they are deactivated before moving out of the mining concession.

To this end, the government has developed a digital portal known as “Medaase Mining Ghana” which has a QR Code detailing the location and sizes of mining concessions across the country.

“These licences are displayed in the offices of these concessioners. Sometimes they either lock the office and bolt or even get security to prevent you from entering the office. So, in view of that, what we’ve done is to create a signpost out of the signpost.

“A QR code is generated, as it is being shown to you and then the details of that concession will be displayed and you will know whether it is a legal concession or not. So, there wouldn’t be any need of you, wanting to enter the offices of that concession,” he stated.

The government came fort came up with the idea of using GPS to track every heavy-duty equipment especially excavators sometime in April 2018 at the peak of illegal mining which was destroying water bodies and cocoa farms.

Ministry of Environment, Science and Technology led the project in collaboration with the Lands and Natural Resources Ministry giving a 3-week ultimatum to illegal miners to remove the equipment from the sites.

Around the same time that in April 2018, more than 500 excavators were reportedly removed from illegal mining sites after the Lands and Natural Resources Ministry issued a 3-week ultimatum to illegal miners to leave the sites.

Questions have been raised about how the excavators intended for road construction have become a symbol of illegal mining in Ghana. There have been reports of excavators levelling cocoa farms to allow illegal miners to rave resource-rich tracts of lands.

It is believed, foreigners finance the importation of the equipment which cost about 2,000 cedis to rent at the time.

Prof. Frimpong Boateng who was the Minister of Environment, Science and Technology at the time and led the committee to stop illegal mining said one way to prevent the destructive use of excavators will be to tag the machines and feed data into a GPS.

This will enable the Ministry to track in an instant, the use and location of the earth-moving equipment. “…through our system we will see that this machine is officially doing construction and not mining’ he explained.

Meanwhile, the current Minister for Lands and Natural Resources, Samuel Abu Jinapor, has denied assertions suggesting that President Akufo-Addo is against small scale mining in the country.

According to the Minister, the president and his government are committed to promoting sanitized and regulated mining in the country to provide jobs for the people.

He however adds that, government will not allow illegal mining activities which destroy water bodies and negatively impact the environment to continue.

He therefore called on Ghanaians to support government’s efforts in nipping illegal mining (galamsey) in the bud so that the environment especially water bodies are not needlessly destroyed thereby affecting water supply in the country.