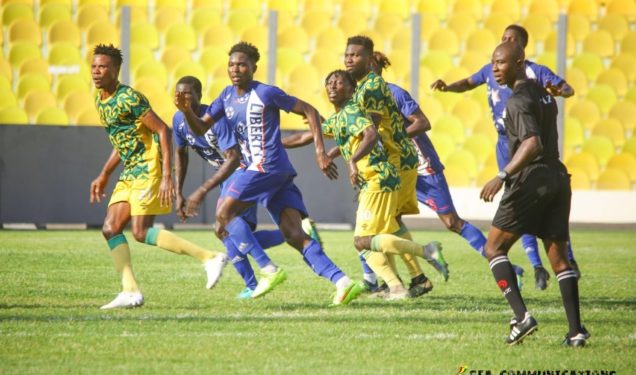 Liberty Professionals boosted their chances of making a return to the Ghana Premier League after recording a 3-1 win over Ebusua Dwarfs on Wednesday in the Ghana Football Association’s 3-way play-off to determine who replaces the demoted Ashanti gold.

Dwarfs took an early lead in the 6th minute through Richard Addai but Liberty responded with goals from Blaise Mac Adjei and William Oduro who scored a brace.

The win gives Liberty Professionals 3-points and a lead on the mini-league table ahead of their second and final match of the play-offs against Tamale City FC on Saturday.

Ebusua Dwarfs will take on Tamale City on Monday after which the team with the most points will be promoted to the Ghana Premier League.

The team will replace Ashanti Gold who were demoted to Ghana’s Division two side after they were found guilty of match-fixing by the GFA’s disciplinary committee.