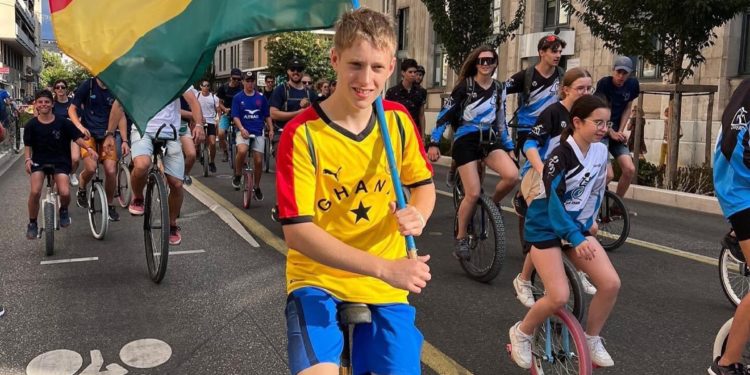 The youngster became the first Ghanaian to ever win medals at the Unicycling Championship after claiming silver and bronze 30m Wheel Walk Race and 50m One-Wheel Race respectively.

In a video posted on social media, the teenager blistered past his opponents to finish second in the 30m Wheel Walk Race. Ghanaian teen Roger Haun III wins two medals at the World Unicycling Championship.

About the Haun Family

William Haun and his wife Heidi have been living in Ghana since Heidi accepted her position as a general surgeon at the Baptist Medical Centre (BMC) in October 2014.

The couple and their children, Trey and KJ returned to Ghana as career missionaries serving with the International Mission Board(IMB).

The ministry, based in Naraligu, is multi-faceted, running the gamut of medical care, volunteer coordinating, pastoral ministry, discipleship, and personal evangelism. Their priority is to make Christ’s name known to the peoples of northern Ghana.

Heidi was in her fourth and final year of medical school at University of South Florida (USF) when she joined IMB’s medical receptorship program.

Between October 2007 – January 2008, the program paid all of Heidi’s expenses to work for two months or more at any overseas Baptist hospital.

Heidi decided to go to Nalerigu to work at the Baptist Medical Clinic for 3 months. Her time there counted as a foreign study rotation at USF.

On the family’s official website( haunsinafrica.com) for their adventures in Ghana, it says “Trey, aka “Cutest Baby in the US of A,” went to Ghana to try and claim the international title by checking out the competition overseas. He primarily served as “morale booster” for his parents when they were tired of the heat and long work hours.”

Well today, Trey has made Ghana proud as he brings these medals from Unicon home! In a Twitter post, William Haun said “We live in Nalerigu and will be presenting the medals to Naa Bɔhagu Abdulai Mahami Sherifa, Overlord of Mamprugu. He is the one who named my son “Manboora” and gave me the title “Sulimiisina’akyinaaba”.