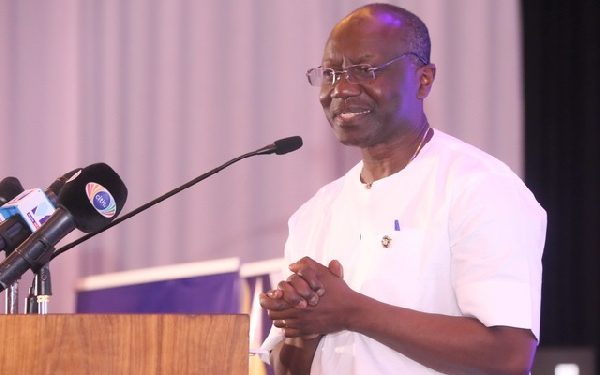 Executive Director of PFM Tax Africa, Seth Terkper, has said it will be a shame for the ESLA levy to become a permanent levy given the purpose and duration for which it was implemented by the previous government.

According to Mr Terkper, ESLA was initially projected to last for three to five years as it was a temporary solution to support government’s budget amid the fall in crude oil prices in 2015.

“The ESLA was supposed to last for 3-5 years and the reasons for which it was set up was that the 2015 budget took a hit when oil price fell from $99 to $35 dollars in anticipation that by the time crude oil prices recover to between $65 and $60, ESLA would have serves it’s purpose and be removed,” said Mm

Speaking further on the issue, Mr Terkper noted the ESLA had no sunset clause because government was convinced it would be able to raise the needed funds to finance debts in the energy sector and arrears owed road contractors and banks within a period of three to five years after which it will withdraw the levy.

“When we did ESLA, we had calculated the debt it was to finance and the only reason it had no sunset clause was because, we wanted to be sure the flow will be consistent for a duration of three to five years which we had estimated based on recovered oil revenue.

“So in my mind, it should have lasted for three to five years, but I don’t think we should have any illusion at all that ESLA will not go away, in my estimation unless we see a presentation made to Parliament to make it go away, it won’t, and will only be extended as it has been done by the current government [sic].

“But it will be a shame to see the ESLA become a permanent tax given its characterization as a nuisance tax,” he noted.

As part of the reforms in the energy sector, E.S.L.A Plc was established as a Special Purpose Vehicle (SPV) to issue long-term bonds backed by ESLA receivables to resolve energy sector debts of almost GH¢10.0 billion owed to banks and trade creditors.

The 2020 annual report on the management of the energy sector levies and accounts projects that ESLA proceeds in the next four years to averagely increase at 12 percent per annum, from 2021 to 2024.

Read: Ghana to receive 1.3 million Pfizer vaccines from US government

Growth in levies is largely envisaged to contribute to the reduction in the financing challenges facing the energy sector, as well as support the Road Fund and Energy Commission in delivering on their mandate.

Since the inception of ESLA Plc to the end of January 2021, a total of GHS 3.881 billion has been paid as interest payment for the benefit of bondholders of tranches of E1 to E4 bonds. The company in 2020 made the required coupon payments of GH¢1.30 billion to its bondholders. Funds in excess of its immediate obligations were transferred to the lockbox in accordance with the requirements of the bond programme and invested in permissible investments.

Currently, ESLA Plc has an outstanding issuance of about GH¢7.63 billion, representing a total issuance of GH¢ 8.294 billion, out of which approximately GH¢664 million was redeemed in a buyback transaction finance with funds from the company’s lockbox account.

Source: norvanreports
Tags: ghanaIt would be a shame to see ESLA become a permanent tax – Seth TerkperSeth Terkper
No Result
View All Result

Ghana's digital divide persists as 47% of population remains offline According to a recent report, Ghana's internet...