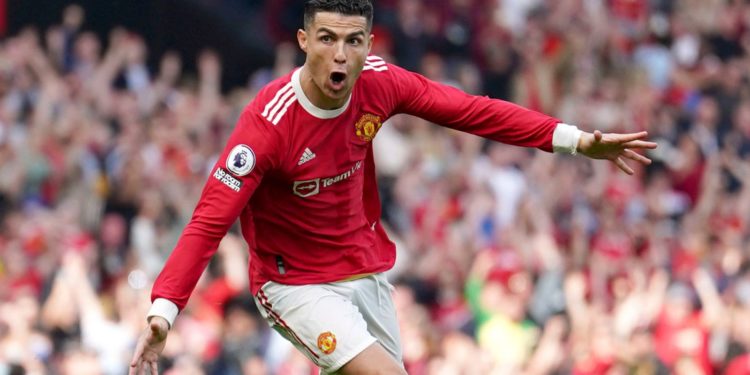 A wonderful strike from Cristiano Ronaldo salvaged a 1-1 draw for Manchester United against a dominant Chelsea at Old Trafford – but the result means United can only now equal their worst-ever points total in the Premier League era.

That decline was plain to see during a first half which featured protests against the Glazers’ ownership and a United team badly exposed on their own patch by visitors who should have made more of the chances afforded to them.

Kai Havertz wasted three good first-half openings but flicked on a cross from the excellent Reece James for Marcos Alonso to volley in a deserved opener on the hour mark.

Two minutes later, though, Ronaldo responded. A wonderful lofted pass from Nemanja Matic played in the forward, who produced a fine touch and hit to smash in his first goal against Chelsea. He’s now scored eight of United’s last nine Premier League goals – a strong rebuke to his critics.

The goal ignited the home fans and suddenly there was fight from the players in red – but the visitors continued to pile forwards and only the woodwork denied James what would have been a fine winner late on.

Chelsea’s club-record winning streak away from home ends at eight but they only need seven points from their remaining five games to seal a top-four spot.

Those Champions League places are a long way off for United, though, who trail Arsenal by five points having played two games more – and United will now be unable to surpass the meagre 64 points they achieved in 2013/14.

There had been a strangely subdued atmosphere prior to kick-off and when the game got underway there were still swathes of empty seats in the Sir Alex Ferguson Stand, with United supporters once again protesting against the Glazers’ ownership.

Those fans eventually arrived in the 17th minute – representing the number of years the Americans have been in control – by which point they’d missed a James rocket and tamer Timo Werner effort test David de Gea during Chelsea’s strong start, and Ronaldo shin a scissor kick well off target in reply.

Chelsea continued to put on the pressure, with Havertz shooting into the side-netting from a tight angle before passing up two great chances when he shot at De Gea from N’Golo Kante’s through ball and then headed meekly at the goalkeeper from a fantastic James cross. Blues boss Tuchel couldn’t hide his frustration on the touchline.

The Chelsea forward let United off again early in the second half, failing to roll in Kante from a lightning counter-attack which left the home side badly exposed, before Mason Mount’s hard low cross flew just beyond the reach of Werner.

The visitors finally got their deserved opener on the hour, with United inviting James to cross from the right and Havertz diverting the ball on for Alonso to hammer home. But that advantage was almost instantly scrubbed out.

From nowhere Ronaldo hauled his side level, exquisitely controlling a super lobbed pass from Matic before lashing past Edouard Mendy.

The goal sparked the home fans and players into life – but still Chelsea kept on coming and James smacked the post from Mount’s clever backheel.

United did finish on the front foot and, for the second time this season they’ve taken a point off a highly-fancied Chelsea side. But the bigger picture underlined the work they have to do to rebuild in the summer.