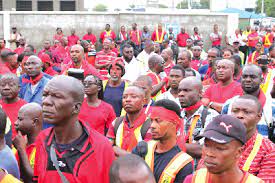 News reaching norvanreports indicate that members of the Maritime and Dockworkers Union have called off their strike action demanding that MPS cedes 20% of containerised cargo at the Ports to the GPHA.

According to reports, the industrial strike action by the Union was called off on Thursday midday, July 14, 2022.

The Union commenced its strike action on Tuesday, July 12, 2022.

The Union in a statement on Wednesday, promised to escalate its industrial strike action should the government try to use security agencies to disrupt the ongoing protest at the Ports.

The Union asserted that any such security intervention will not be in the interest of the country and will be in support of a foreign entity that is “fleecing the country at a time when Ghana needs every revenue it justifiably can mobilize.”

The Union in the statement, however, noted that it is prepared for such any security intervention as it will not back down from continuing the strike action until it demands for the 20% of the containerised cargo at the Ports is ceded to the Ghana Ports and Harbour Authority (GPHA) as per a Cabinet directive issued in 2019.

The local unions of the Ghana Ports and Harbour Authority (GPHA) have declared their intention to stage a massive demonstration to protest the Meridian Ports Services (MPS)-GPHA concession agreement signed in 2015.

On Tuesday 12th July 2022,the local union  sent a caution to the government that they will protest against the 20% revenue collection saying; that they were dissatisfied with how the agreement’s content was handled.

In an interview, the Union Chairman, Mr. Emmanuel Arhin Young, stressed that the MPS-GPHA deal was having dire implications on the GPHA workforce and the entire nation. This development, he said, compelled the Maritime Dockworkers Union (MDU) to petition the presidency on the matter, which necessitated a cabinet meeting on the issues and concerns raised by the unions.

However, a fallout of the cabinet meeting directed the sector minister, Kwaku Ofori Asiamah to engage with both parties (MPS-GPHA) to ensure that the demands of GPHA are adhered to by MPS which include; GRA compliance with all refrigerated containerized cargo volumes from MPS to GPHA Reefer Terminal, GPHA to implement its intention of leasing Harbour Mobile Cranes for its containerized vessel operations, and GPHA be allowed to handle 20% of containerized cargo traffic during the ten-year exclusivity period.

According to Mr. Arhin directives have been duly communicated to MPS with several reminders but MPS has failed to adhere to the directive of cabinet, especially on the 20% container volumes since 2019. The non-adherence of MPS due to the inaction of Ofori Asiamah, on the directives of cabinet necessitated the local unions to engage both the management of GPHA and the Minister on the MPS-GPHA issues which sound frustrating and hopeless, he added.

He said the local unions viewed this as an act of gross disrespect by MPS to cabinet, and by extension the President, for disregarding his cabinet-led directive over the period.

Mr. Arhin said the Minister of Transport’s failure to enforce cabinet’s directives on the MPS-GPHA was becoming more frustrating for local unions.

That situation, he continued, has left the local unions with no option but to embark on a massive demonstration in the coming days to impress upon MPS to implement the directives of cabinet and by extension the President to the latter to help save the current situation of GPHA and the nation.