Foreign portfolio investors are likely to move their funds out of Nigerian fixed income markets as a result of the country’s downgrade on the JP Morgan index.

Nigeria was removed from the overweight category on the JP Morgan index, seven years after it was also kicked out of the American bank’s Government Bond Index Emerging Markets (GBI-EM) due to foreign exchange illiquidity.

Given the exit, the already dwindling fixed income market is likely to feel even more heat, as this might result in more potentially significant capital outflows, making it more difficult to attract foreign portfolio inflows and raising the government’s borrowing costs, according to analysts interviewed by BusinessDay.

“Nigeria’s national oil company did not transfer any revenue to the government from January to March this year, due to petrol subsidies and low oil production,” JP Morgan said.

According to the National Bureau of Statistics, the Foreign Portfolio Investments (FPI) dropped by 74.89 percent to $3.89 billion in 2021 from a peak of $13.49 billion in 2012, when Nigerian bonds were first listed on JP Morgan’s GBI-EM in October of that year.

The analysts, however, believe that the local investors would become the new major force driving the Nigerian fixed income market due to the increase in yields.

“We believe local investors may become attracted to these instruments as their yields climb higher. For example, average yield on Nigerian Eurobonds (at 11.5 percent as of 11-May), is higher than average yield on sovereign naira bonds (at 11.3 percent as of 11-May). Thus, local investors may consider this an attractive opportunity to earn higher interest while also hedging currency risks,” they said.

JP Morgan removed Nigeria from its list of emerging market sovereign recommendations that investors should be ‘overweight’ in, saying the country had not taken advantage of high oil prices.

Read: TotalEnergies is selling off its 10% stake in 13 Nigerian onshore oilfields

“Overweight means to hold a higher portion of that instrument relative to the portion in the benchmark index,” said Ayorinde Akinloye, an investment research analyst at United Capital.

Oil prices averaged $97 in the first quarter of 2022, the highest since 2011, but Nigeria has been unable to benefit from the oil price rally because of low production.

Ayodeji Ebo, managing director and chief business officer at Optimus by Afrinvest, said there would be an increased pressure on local currency as foreign investors move their money from the market, thereby needing dollars.

United Capital said that policy normalisation by the US Federal Reserve and sustained dollar denominated debt capital raising by the Nigerian sovereign had underpinned a weak outing for Nigerian Eurobonds. 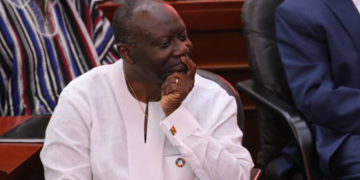