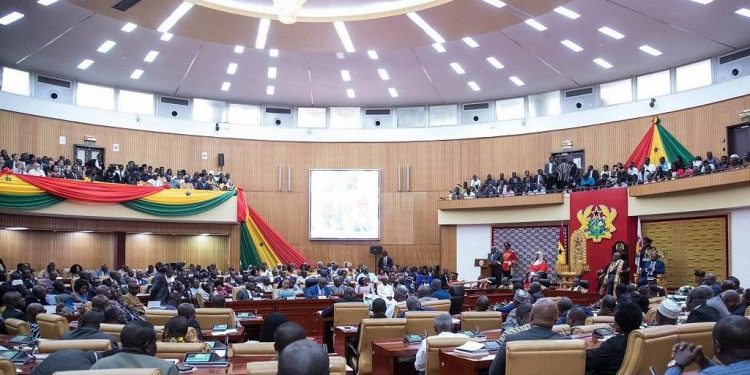 Parliament has postponed sitting to January 18, 2022, without passing the controversial Electronic Transaction Levy of 1.75% which was expected to be considered by the House under a certificate of urgency.

The adjournment of Parliament comes after the House reconvened today, Tuesday, December 21, 2021, following the abrupt suspension of sittings by the Second Deputy Speaker, Andrews Asiamah, after a fight broke out during the voting on the E-levy on Monday night – December 20, 2021.

At the commencement of sitting on Tuesday (21 December), the Majority Leader, Osei Kyei-Mensah-Bonsu, suggested to the First Deputy Speaker, Joseph Osei-Owusu, who was presiding to adjourn the House to 18 January since efforts to reach the Speaker by phone has not been answered and to allow cool heads to also prevail before taking a vote on the E-Levy.

According to him, the House wasn’t in a serene environment to conduct business, considering the events of the previous night.

“We adjourned sitting yesterday [Monday] and indicated to ourselves that the house will be reconvening at 9:00 am today, (Tuesday, December 21, 2021, but we have been waiting for all this while making the necessary calls but thus far, nothing responsive, and I think where we are if we take an adjournment it will allow coolers to come back to this house, and then we come back to continue with business in a much more serene environment. In that regard, Mr. Speaker, I invite you to adjourn the house in the hope that we can come back on January 18,” he said.

This was seconded by the Minority Leader, Haruna Iddrisu, who also said the adjournment will allow for more consultations on all pertinent issues.

“It is important that we carry the country along, and we need to demonstrate to the country that our democracy is growing and will not suffer some unacceptable scenes and spectacles we’ve witnessed on the floor.”

“So I can only concur with what the leader has said, so you adjourn the house sine die for some consultation on the outstanding issue,” he stated.

Read: Waiver of Penalty and Interest: GRA reminds taxpayers of forfeiture of right after Dec. 31

It was chaos again in Parliament on Monday night – similar to what was witnessed at the beginning of the year when Parliament was voting for a new Speaker – during voting on the controversial E-levy bill.

During the voting process – on whether the E-levy bill should be taken under a certificate of urgency in the plenary or not – the minority got incensed over attempts by the presiding Speaker, Joe Osei-Owusu who is also the MP for Bekwai Constituency in the Ashanti Region to leave the chair to cast his vote.

Barely a week ago the Speaker of Parliament Rt. Hon. Alban Sumana Kingsford Bagbin on his return from his medical leave abroad had said according to the standing orders of the house, a person who is a member of parliament who sits as the speaker forfeits his rights to cast a vote on any matter before the house during the proceedings.

This the minority had earlier during the debate on the matter raised issues with and contended that per parliament’s standing orders, the Speaker of Parliament does not have a casting vote, giving an indication that they were not going to allow for that to happen the second time, however, Joe Osei Owusu indicated that, he would still vote.

The single act of the sit-in Speaker Joe Osei Owusu who is the First Deputy Speaker of Parliament led to parliamentarians’ exchanging blows among themselves while some officials of parliamentary services tried to protect the Speaker’s seat and the mace of parliament from being attacked.