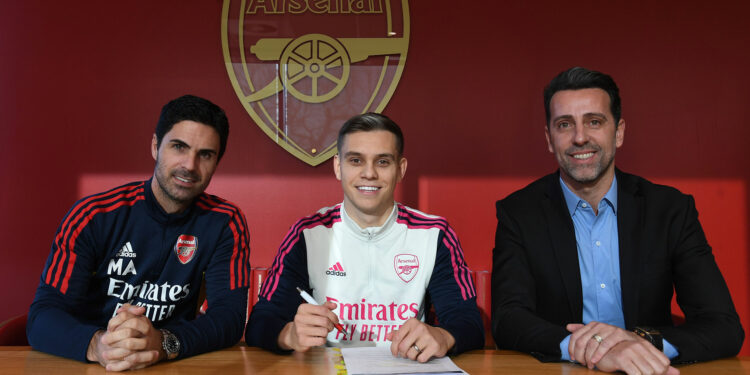 Arsenal have announced the signing of Leandro Trossard from Brighton & Hove Albion.

The 28-year-old Belgium international has joined the Premier League leaders on a long-term deal, believed to be a four-year contract with the option of an additional 12 months.

Trossard becomes Arsenal’s first signing of the winter window, and the Gunners have reportedly paid an upfront fee of £21m for the attacker, potentially rising to £26m with add-ons.

Trossard will wear the number 19 shirt for Arsenal, who are “hoping” that the Belgian can make his debut in Sunday’s clash with Manchester United, having submitted the necessary paperwork before Friday’s 12pm deadline.

“It is good work from everyone at the club to complete the signing of Leandro. He is a versatile player with high technical ability, intelligence and a great deal of experience in the Premier League and at international level,” Arsenal manager Mikel Arteta told arsenal.com.

“Leandro strengthens our squad as we head into the second part of the season and we’re all looking forward to working with him. We welcome Leandro and his family to Arsenal Football Club.”

Trossard left Genk in 2019 to sign for Brighton, where he amassed a total of 25 goals and 14 assists from 121 appearances across all tournaments, including seven goals in the current Premier League season.

The 28-year-old’s contributions included a memorable hat-trick against Liverpool in a 3-3 draw at Anfield in October, but he left Brighton on a sour note after a falling out with manager Roberto De Zerbi.

After being left out of the Seagulls’ squad for their 3-0 win over Liverpool last weekend amid alleged concerns over his attitude, Trossard took an unauthorised trip back home to Belgium, and his agent launched a scathing attack on De Zerbi for ‘humiliating’ his client in training.

Trossard’s representative stated that a transfer away from Brighton would be best for all parties, and Arsenal have pipped Chelsea and Tottenham Hotspur to the signing of the attacker.

“We’re delighted to have completed the signing of Leandro Trossard. We have a clear plan and strategy for our direction, and it’s been a great team effort in bringing Leandro to the club,” sporting director Edu added.

“Leandro is a player who will give us a high level of quality going forward. I know Mikel and our coaches are excited to start working with him. Welcome Leandro!”

Arsenal turned their attention to Trossard after missing out on the signing of Mykhaylo Mudryk to Chelsea, and Arteta’s side are expected to remain active in the January window.

The North London giants are reported to be closing in on a deal for Spezia centre-back Jakub Kiwior, who will supposedly complete his medical over the weekend before putting pen to paper on a five-and-a-half year deal.

Arsenal sit five points clear of Manchester City at the top of the Premier League table ahead of the visit of Man United on Sunday afternoon, and victory would see them move 11 points clear of the third-placed Red Devils.