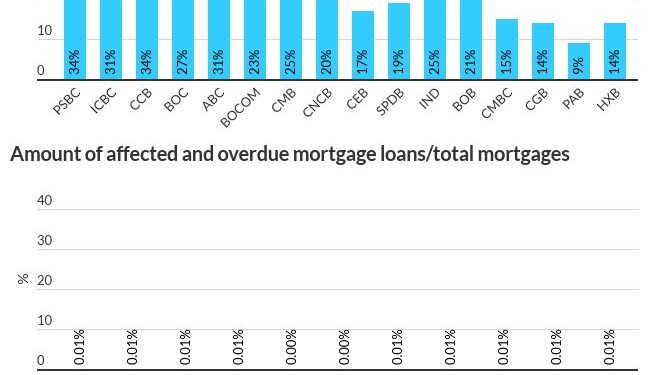 A rise in the number of Chinese homebuyers ceasing mortgage payments on properties where construction has been suspended for a prolonged period could weaken banks’ asset quality, says Fitch Ratings.

Authorities are likely to step in to curb mortgage defaults from spreading more widely and to larger cities, but a failure of policy intervention to restore homebuyer confidence could test the banking system’s resilience and heighten liquidity pressure at developers.

Household leverage stood at 62% of GDP and 112% of household disposable income at end-2021, which was modest by global standards. A recent rapid rise in debt may have stretched household balance sheets for certain segments of the population, but we do not believe a major deterioration in household debt serviceability was the driving factor in the mortgage boycott.

The development more likely reflects prolonged and widespread distress in the property-development sector, which drove the suspension of construction at a number of pre-sold housing projects. Mortgage payments for pre-sold projects typically begin at the time of purchase, rather than when construction is completed.

We do not believe the defaults will directly affect Fitch-rated Chinese banks, with most disclosing that affected mortgage loans amount to less than 0.01% of their outstanding residential mortgage loans. However, should defaults escalate, there could be broad and serious economic and social implications.

Smaller and regional banks located in less-developed regions that have a large and concentrated exposure to distressed developers are likely to be the most vulnerable, as most homebuilders that have experienced distress since 2H21 have projects in lower-tier cities in China’s inner regions. Suspended projects of this type are more likely to be affected by the mortgage boycotts.

Our base case assumes that China’s property sales will stabilise in 2H22, based on our current expectation of a 25%-30% decline in 2022 sales, followed by low single digit growth in 2023. A delay in the recovery of sales would further damage the performance of property-developer loans and, potentially, residential mortgage loans. Asset risks for bank loans that are collateralised by residential properties, such as micro and small enterprise loans, could also increase.

The mortgage boycotts highlight the importance of tight regulatory oversight of escrow accounts, and we do not expect local governments to provide liquidity relief to property developers by relaxing controls over the use of such funds. As such, the funding environment is likely to remain tight for developers until property sales show a sufficient and consistent recovery. However, such a recovery may be stalled by rising homebuyer concerns about project delivery.

Most developers are likely to continue relying on internal cash and asset disposals to meet capital-market maturities, but we expect smaller developers with large maturities through to 1H23 to consider using debt exchanges for offshore capital market debt, which is less disruptive to onshore operations and financing.

Selective policy easing should boost property-market sentiment and ease the sector’s liquidity strains, although we do not expect a reversal of curbs on excessive property-related lending.

The ratings on Fitch-rated Chinese banks remain support driven. Still, downside risks to banks’ asset quality and, potentially, their Viability Ratings could rise if defaults and delayed government intervention trigger major economic and social disruption and if property-market stress worsens or lingers beyond 2023. Aggressive loosening of underwriting standards towards troubled developers could also weigh on our assessment of the operating environment for Chinese banks.