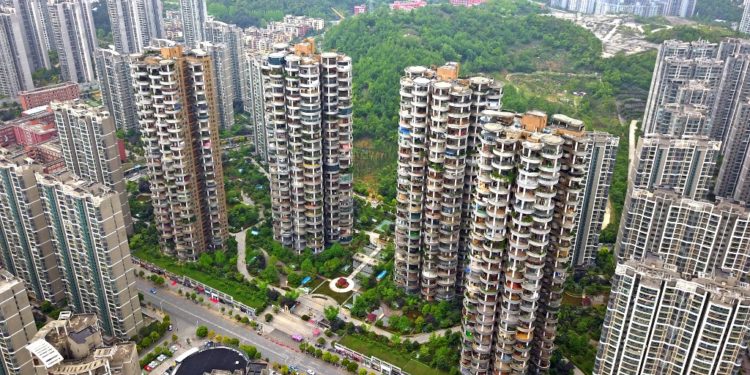 An aerial view of a strange local apartment, which seems like composed of many circles, in the city center, Guiyang city, southwest China's Guizhou province, 26 April 2020. (Photo by Stringer / Imaginechina via AFP)

Decisive changes in government policies should improve sentiment in the primary housing market, but the value of sales is still set to fall by 25%-30% in 2022, says Fitch Ratings.

Our forecast for the fall in sales in 2022 is steeper than our previous projection, made in December 2021, of a 10-15% decline. It approaches the 30% decline that we assumed in a scenario that we used in December 2021 to analyse potential liquidity stress in the sector.

Nonetheless, Fitch believes that 1Q22 is likely to mark the trough, with the decline in housing sales moderating over the coming months. Policymakers have provided clearer support, with home-purchase restrictions and minimum downpayment requirements being eased in a number of jurisdictions. Banks have also been encouraged to speed mortgage approvals since October 2021.

While the government has encouraged onshore financial institutions to lend to property developers, Fitch expects capital-market access will be limited for most developers this year and that they will continue to rely on internal cash to meet capital-market maturities in 2H22. Stronger developers may still be able to raise offshore capital-market debt, some with credit enhancements from third parties.

We think a lack of capital will inhibit financially challenged developers’ capacity to ramp up land acquisitions and project launches. This means a rapid, sharp recovery in sales is unlikely. However, the low base for 2022 sales, and strengthening momentum in 2H22, should be sufficient to return the market to modest positive growth in 2023.

The property sector faces lingering disruption from periodic, localised restrictions designed to curb the spread of Covid-19. Our forecasts for 2022 assume that the impact on housing sales from these measures should be recoverable in subsequent months. However, that assumption could be challenged should pandemic-related lockdowns pose more systemic economic growth problems.

Fitch believes the recent strains in the property market will lead to structural changes over the medium term. We expect state-owned developers and financially healthy private developers that are still able to access funding in the current climate to gain significant market share at the expense of more financially challenged developers. The latter have not acquired land banks since 2H21.

We project developers’ financing costs will remain relatively high, which may prompt privately owned firms to adopt more ‘asset-light’ development models. Those that are able to sustain improvements in financial transparency should find it easier to secure financing and the trust of homebuyers. However, we believe overall developer margins will remain generally weak.

The steep drop in sales over 2022 will bring the market closer to alignment with longer-term demand trends – we view the volume of sales in 2020 and 2021 as unsustainable, at around 1.5 billion-1.6 billion sq m of housing per year. In line with this, we expect developers to become more conservative and selective about land bank acquisitions over the medium term, which will facilitate their deleveraging efforts.

We believe the current downturn will not deter long-term housing demand, which will continue to be driven by urbanisation – a multi-year trend in China. Along with newer funding and development models, we expect affordable housing to become an increasingly important part of the market. However, there will still be a role for private housing, amid broad-based rising levels of affluence in China.