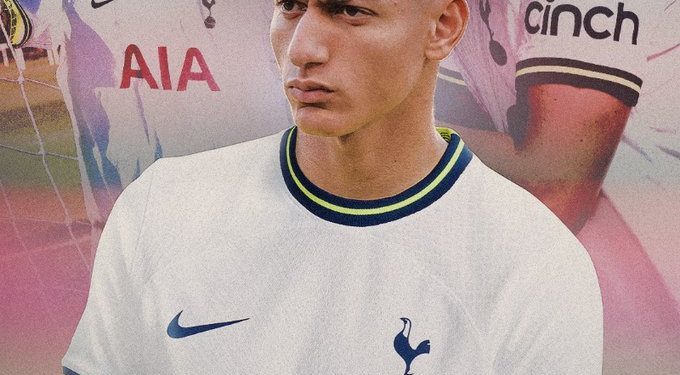 The 25-year-old has become Spurs’ fourth arrival of the summer window and joins Ivan Perisic, Fraser Forster and Yves Bissouma in North London for the 2022-23 campaign.

Antonio Conte’s side are believed to have paid an upfront fee of £50m to sign the former Watford man, which could rise to a total of £60m with performance-related add-ons.

Tottenham moved quickly to wrap up a deal for Richarlison amid reports of Chelsea attempting to hijack a move for the Brazil international, who leaves Everton after a four-year spell.

The club are believed to have flown a doctor out to Richarlison’s native Brazil in order for the striker to undergo his medical, and he agreed personal terms on a five-year contract with the Lilywhites without any difficulties.

During his four years at Everton, Richarlison struck 53 goals and set up 14 more in 152 appearances for the club in all competitions and helped the Toffees stave off relegation to the Championship last term.

The former Fluminense youngster struck 10 goals and five assists in 30 top-flight appearances during the 2021-22 season but was widely expected to depart Goodison Park to challenge himself in Europe.

Furthermore, Frank Lampard’s side were under pressure to raise funds before July 1 amid their precarious financial situation, which could have led to punishment from the authorities.

Everton had until the end of the week to make a big-money sale in order to comply with the Premier League’s profit and sustainability rules, and failure to do so could have seen them risk a point deduction.

Richarlison arrives at Tottenham to compete with the likes of Harry Kane, Dejan Kulusevski, Son Heung-min, Steven Bergwijn and Lucas Moura for attacking starts in the 2022-23 season.

The South American will also have the chance to test himself in the Champions League, but former teammate Andros Townsend does not believe that Tottenham represent a “step-up” for the striker.

“I think you’re being slightly disrespectful by calling Spurs a step-up,” the 30-year-old told talkSPORT.

Richarlison only finished as high as eighth in the Premier League during his time at Everton, and his arrival at Tottenham could potentially open the door for Bergwijn to leave the club.

The Dutchman has already confirmed his desire to seek pastures new in the current window and has been strongly linked with a switch to Ajax, in spite of recent reports claiming that he could be used in a part-exchange move with Everton.

Tottenham are also understood to hold an interest in signing fellow Toffees attacker Anthony Gordon, but Everton have no intention of parting ways with the England Under-21 international

Tags: Fraser Forster and Yves BissoumaIvan PerisicTottenham Hotspur have confirmed the signing of Richarlison from Everton