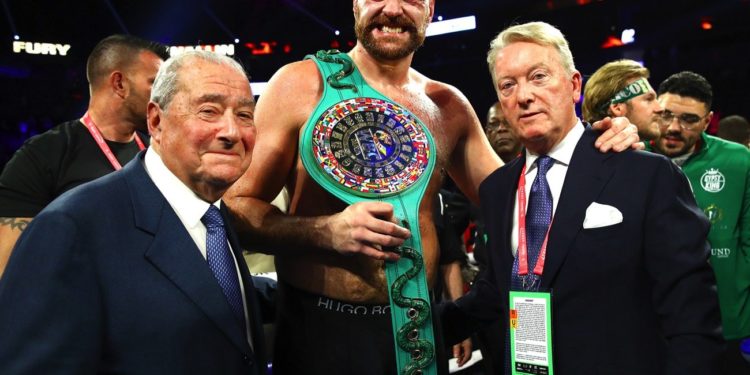 Renowned boxing promoter Frank Warren has revealed that Tyson Fury won’t be defending his WBC heavyweight title when he returns to the ring in March.

According to Warren, the arbitration hearing for Whyte’s legal dispute with the World Boxing Council isn’t until March, and they won’t know until then what the purse splits will be for the Fury-Whyte fight.

“Yeah, I’m pretty confident that one of those shows will feature him,” said promoter Frank Warren to iFL TV when asked if Tyson Fury will be fighting in March.

“It’s not with our making or his making, I should say. The WBC and Dillian are in arbitration. That is not set to be heard until March. We can’t negotiate. It’s all very well Eddie Hearn with his nonsense about negotiating.

“In the meantime, Fury isn’t going to sit around and wait on Whyte’s arbitration case to be concluded with the WBC.

“So Tyson will fight, but not for the WBC title. They won’t. The arbitrator will in March,” said Warren when asked when the WBC will determine the purse splits. “That’s when the deadline is for the hearing.

“This has nothing to do with our side of the table. We’re innocent parties. That’s not our thing. This is a legal dispute between the WBC and Dillian Whyte, which is being settled by an agreed arbitration. It’ll take place in March,” said Warren.

In March, Fury will return to the ring, and his WBC title won’t be on the line for that fight. Instead, Fury will defend his Ring heavyweight title, says Warren.

The arbitration case for Whyte will determine if Dillian will get his desired 55/45 split or if Fury will get the 80/20 split that he wants for the fight.

“The fact of the matter is, you can’t negotiate when one guy [Dillian Whyte] says he thinks he’s getting 45% of the pot, and we feel differently, and the WBC feels differently about it.

“Even though they’ve not said it, I know for a fact that he [Dillian] lodged his purse, which was 300,000 for his last fight [against Alexander Povetkin]. I know Tyson was far more money than that [in his trilogy fight with Deontay Wilder on October 9th].

“So, that’s how they determine the value of a fighter and a value of a purse bid when it goes to purse bids. This is what you normally earn, so this is what it is.

“That’s for the arbitrator to decide, and hopefully, he does the sensible thing, and we can get on with it. Dillian would know what the bottom line is, and we can commence serious negotiations,” Warren said.