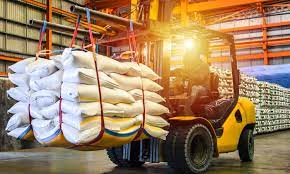 UK food and drink exports to the European Union almost halved in the first three months of the year, compared with the same period in 2020.

The trade body said the decline was largely due to changes in the UK’s trading relationships, but said the pandemic was also a factor.

The government said it was “too early to draw any firm conclusions” on the long term impact of Brexit.

It also said the pandemic had depressed demand.

“The most recent ONS trade statistics show that for both March and April, overall exports to the EU have exceeded the average levels across 2020,” a government spokesperson added.

Rachel Hicks, co-founder and co-distiller at Sky Wave Gin said the “red tape is strangling” her business. She said that EU sales “utterly dropped off a cliff” in the first quarter, meaning her turnover was down 30%.

“The real shame is somewhere like Asia – a fast growing region for gin – is going to potentially snaffle all the markets,” Ms Hicks said.

“We are now unable to quickly send gin to our customers all over Europe and have to wait for HMRC to inspect us every time we send gin abroad.”

Graham Flannigan from Berwick Shellfish in Northumberland, is in a similar position. He said his seafood exports had “come down drastically” mainly due to Brexit and the impact of lockdowns.

“The logistics systems are moving better now but it’s the red tape that is having to be built into the cost of the goods and this is having a knock on effect,” he added.

Dominic Goudie, the FDF’s head of international trade, said the drop in exports his federation had recorded was a “disaster” for the industry.

“It is a very clear indication of the scale of losses that UK manufacturers face in the longer-term due to new trade barriers with the EU.”

New trade barriers were not the only factor affecting cross channel trade. The FDF said that the Covid-19 outbreak accounted for a decline of some 10-15%.

Figures for the quarter were also affected by companies stockpiling ahead of the Brexit-related changes.

The combination of these factors, the FDF says, led to significant falls in the value of leading exports.

Compared with the first quarter of 2019 – before Covid became a factor – exports of cheese were down 72%; fish sales were down 52% and chocolate was down 37%.

Exports of food and drink to nearly all EU nations fell significantly in the first quarter, compared with the same period last year.

Worst hit was trade with Ireland – normally the sector’s biggest overseas market. It was down by more than 70%. But sales to Germany, Spain and Italy also more than halved.

For decades, the UK has sold more food and drink to the European Union than to the rest of the world combined.

However, the fall in shipments to Europe means that is no longer the case. In the first quarter exports to non-EU nations made up 55% of the total.

The FDF said this is the first time this has happened in at least 20 years.

Overall, sales to non-EU countries rose by 0.3% – although there was a significant increase in shipments to China.

Sales to the region, which fell in the first quarter of last year due to Covid-related lockdowns, recovered to reach £200m – well above their pre-pandemic level of £163m.

On 31 December, the so-called ‘implementation period’, in place since Britain left the EU, came to an end.

That meant trade across the channel became subject to new post-Brexit regulations and customs formalities for the first time.

This FDF says this has had a particularly significant impact on the trade in products of animal origin and other perishable foods, because it led to significant delays while formalities were completed.

“Trade that would take 12 hours in the past can now take a day or even a week,” said Mr Goudie.

“If you lose two days or even three days it takes a big chunk out of the of shelf life of the product, which makes the trade itself less viable.”