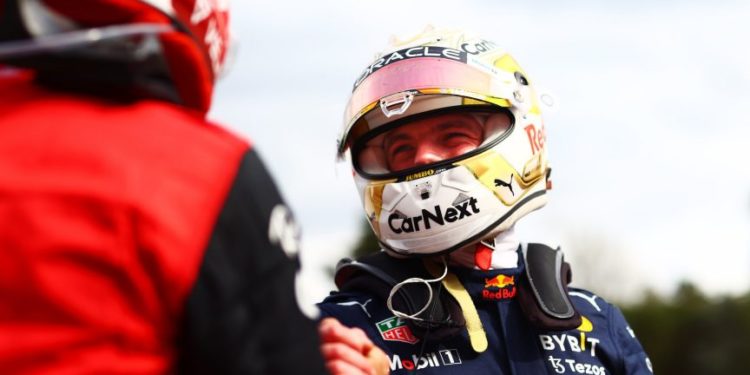 Friday’s wet qualifying session set the grid for this Sprint, Verstappen having taken pole position over Leclerc with Lando Norris leading Kevin Magnussen off the second row. An overhauled format now sees points awarded to the top eight rather than the top three – even more incentive to give it all on Saturday afternoon, under clouds spitting with rain…

It was Leclerc, to a rapturous reception from the tifosi, who took the lead off Verstappen as the lights went out – only for the Safety Car to interrupt proceedings as Zhou Guanyu (DNF) and Pierre Gasly (P19) made contact through Turn 9 on Lap 1. Green-flag racing would resume on Lap 5, Leclerc leading Verstappen then Norris at the time.

Norris dropped to P5 for McLaren, Ferrari’s Carlos Sainz up six places having crashed out of Q2, which caused him to start 10th on Saturday. Sainz claimed P4 off the McLaren with just two laps remaining.

That left Daniel Ricciardo sixth, where he started, ahead of a fast-moving Alfa Romeo of Valtteri Bottas, who took P7 off medium-tyred Haas driver Kevin Magnussen late in the Sprint.

Magnussen held on for the final point, finishing ahead of Alpine’s Fernando Alonso in P9 – who started fifth but couldn’t contend with his rivals’ pace on the softs – and the other Haas of Mick Schumacher, who took P10 on mediums.

George Russell recovered back to 11th having lost places at the start, finishing ahead of AlphaTauri’s Yuki Tsunoda and the Aston Martin of Sebastian Vettel – who gradually fell out of the top 10 and into 13th by the flag.

Lewis Hamilton started 13th and finished 14th in another tough showing for the Silver Arrows.

Lance Stroll rounded out the top 15 for Aston Martin, having started P15 for the Sprint.

Gearbox issues put Esteban Ocon 19th for the start of the Sprint and he made up three places for P16 in the Alpine, keeping Gasly – who collided with Zhou at the start and pitted for a nose change – 17th.

Williams’ Alex Albon started last due to a brake fire in qualifying, and ended up 18th – his team mate Nicholas Latifi 19th, with Zhou the sole retiree on Saturday.

Sunday will therefore see Verstappen start first ahead of Leclerc, with Perez and Sainz sharing the second row.

The Sprint has set the provisional grid for Sunday’s Emilia Grand Prix, which is set to take place at 1500 local time at Imola.