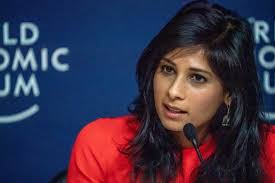 The world is in a liquidity trap with policy interest rates staying below 1 per cent in 60 per cent of global economy and 97 per cent of advanced economies which calls for a synchronised fiscal push to lift up prospects for all, IMF chief economist Gita Gopinath has argued in an op-ed published in The Financial Times on Monday.

Gopinath made a strong case in the article for fiscal policy to support firms and to boost consumption saying that governments can counter the shortfall in aggregate demand and that credit facilities installed by central banks can only assure the power to lend, but not to spend.

Fiscal policy will need to be the main game in town, Gopinath said while tweeting about the article.

My @FT op-ed: For the first time, in 60% of the global economy, 97% of advanced economies, central banks policy interest rates are below 1%. The world is in a global liquidity trap. Fiscal policy will need to be the main game in town. https://t.co/uh5o8RK8e9

“Vulnerable but viable firms require support, a problem that is much better addressed by fiscal policy,” Gopinath said in The Financial Times article, emphasising that fiscal policy must play a leading role in the recovery.

Gopinath’s emphasis on fiscal measures resonates with calls from Indian businesses for greater support from the government for the recovery.

The government is now evaluating suggestions from industry bodies and ministries about the needs of specific sectors.

India has had one of the most stringent lockdown restrictions meant to fight back the pandemic.

The government’s response to the economic impact has been mostly focused on humanitarian support for the most vulnerable people, liquidity support for micro, small and medium enterprises, long pending reforms in agriculture and suspension of bankruptcy proceedings against defaults during the pandemic.

Businesses, however, are seeking more direct measures for badly affected sectors. But after a corporate tax rate cut last year and several rounds of GST rate reductions since 2017, the headroom for further tax relief remains limited in the face of a spike in spending requirement.