Asia’s productivity needs a boost that digitalization can provide

Asia’s productivity needs a boost that digitalization can provide

More broadly, deep economic scars from the pandemic and the lackluster productivity growth that preceded it are weighing on the region’s longer-term growth prospects. But despite these challenges, we see a promising path for boosting Asia’s productivity that runs through a landscape in which it has a history of leadership: digitalization.

Digital technologies can increase the efficiency of the public and private sectors, expand financial inclusion, improve access to education, and open new markets by allowing companies to serve distant customers. For instance, during the pandemic, digitalization improved the allocation of precious resources for health and social benefits, allowing a prompt provision of relief while keeping leakages of public spending in check. Digitalization has helped support resilience during the pandemic, where, combined with large fiscal support, remote work and online sales protected workers, students and businesses.

Asia’s digital landscape has swelled in recent years, encompassing a broad range of innovations, from manufacturing automation to e-commerce platforms, all the way to digital payments. The region accounted for 60 percent of patents in digital and computer technologies right before the pandemic, up from 40 percent two decades earlier. The manufacturing power­house enjoys a wide global lead in installation of industrial robots. China is the single biggest robot user, accounting for some 30 percent of the market. 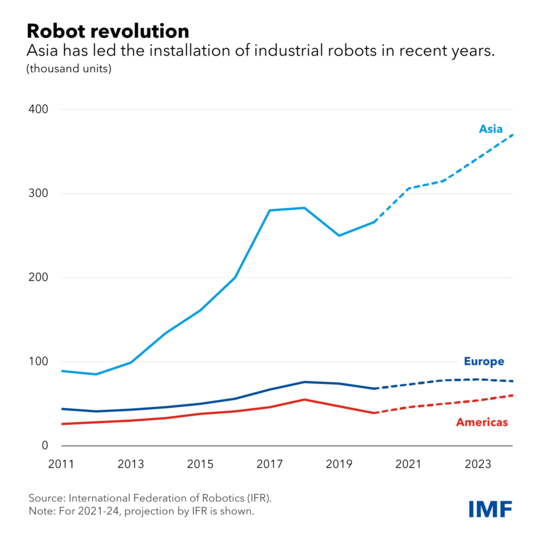 Japan’s Rakuten, China’s Alibaba Group, and Indonesia’s GoTo Group are major players in e-commerce, with revenues that rival that of Amazon and Walmart. India’s pioneering of digital infrastructure known as stacks has made it a leading example of how to bring together digital payments and identification to expand access to finance. Growing youth populations in Bangladesh, Indonesia and Vietnam have rapidly adopted new technologies and become a sizable potential customer base for the digital economy.

The pandemic accelerated the region’s digitalization trend. The proportion of patent applications for remote work and e-commerce technologies surged during the pandemic as did spending on e-commerce, with Asia now accounting for nearly 60 percent of the world’s online retail sales. E-commerce revenues grew by 40–50 percent in Vietnam, Indonesia, and India in 2020, outpacing most of the world. 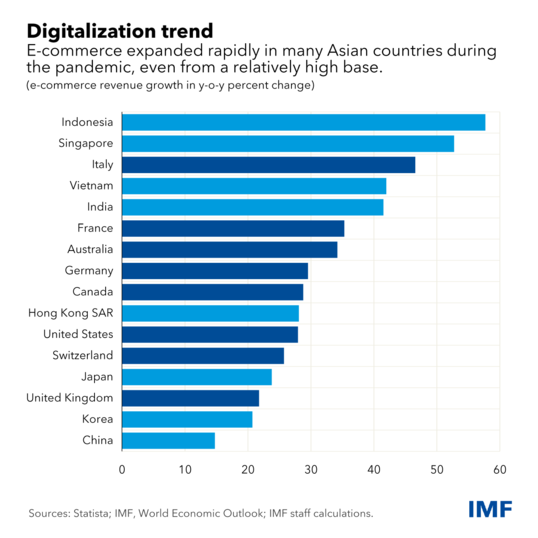 This rapid increase was spurred by the shift away from cash payments and a resulting boom in digital alternatives, particularly e-wallets and prepaid cards.

Despite successes, the region’s digital divides constrain productivity growth. Access to cutting-edge digital technologies is highly uneven within countries, and across firms.

Small and medium-sized enterprises face significant barriers to access and use of digital technologies. Our new paper shows that nearly half of SMEs and about a third of large firms in emerging and developing Asia report difficulty in obtaining financing as a major barrier to technology adoption. Low levels of digitalization and difficulties in accessing and adopting new technologies made it hard for these firms to telework or sell online amid the pandemic.

A slow diffusion of technology between leading and lagging firms also underpins the technological divide. Constraints such as the scarcity of a digital-savvy workforce, unequal access to digital infrastructure, weaknesses in the legal environment, including lack of adequate legislation on data protection and intellectual property rights, hinder information sharing and confidence in technological adoption.

Digital gaps also prevent workers from reaping the full rewards of participating in the new economy and reaching their full potential. For example, with only a quarter of the overall population using the internet, Indonesia has one of the lowest internet penetration rates in Southeast Asia. And while access is affordable in Vietnam and Bangladesh, internet connections are often slow.

Our new paper focuses on needed reforms to bolster broad-based innovation and digitalization to boost aggregate productivity and growth in Asia.

Asia is poised to continue leading digital innovation. Facilitating equal access to technologies across firms, industries, and workers will help the region fully benefit from the economic boost that digitization offers.