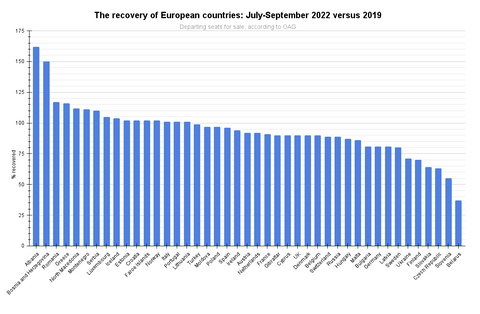 As restrictions increasingly loosen in European countries, demand rises and airline capacity returns toward, or even exceeds, pre-pandemic levels.

The growth of LCCs/ULCCs (up 37%) have played a vital role. This look follows the Air Service One/The ANKER Report, which analyzed the situation at the start of the month.

Potential stumbling blocks in the recovery is a lack of staff, including ground and cabin crew, coming exactly when it’s not needed: as the peak summer approaches.

It will potentially delay, or at least complicate, the recovery; British Airways is leasing Finnair A321s for this reason.

As shown below, Albania is far above all other countries by added capacity in the third quarter. It is up by 62% versus 2019, with more than 409,000 additional departing seats. It is mainly due to one operator: Wizz Air. The ULCC is also primarily responsible for the growth in Bosnia and Herzegovina, Romania, and North Macedonia, with large numbers of routes added.

In terms of total capacity added, Greece is the easy winner. It has almost 2.4 million more than it did in 2019, pushing its offer to 17.1 million. It is now Europe’s eighth-busiest country, up by one place, helped by significant growth by Aegean Airlines (230%), easyJet (157%), Ryanair (135%), and many more. Across all carriers, most of Greece’s expansion has, as you’d expect, come from islands rather than Athens.The bottom ten countries

As shown below, Belarus has, not surprisingly, recovered the least, with capacity at just 37%. The inclusion of Ukraine is unfortunately optimistic, given there is no end in sight to the war. Many airlines plan Ukraine flights in the third quarter, but they’ll probably be removed.

Notice Finland (69.7%) and Sweden (80.2%), both well below previous levels, in stark contrast to Norway – the location of Routes Europe 2022, from where I’m writing – now at 101.7%. Norway and Sweden have no COVID restrictions, while Finland does.

Lufthansa has slightly recovered more than the whole country (82.9%), but Eurowings, Ryanair, easyJet, TUI fly Deutschland, and more, are down by more. easyJet is at 40%, but that is somewhat unfair: it reflects the vast cuts it already made to its German network from unprofitability.