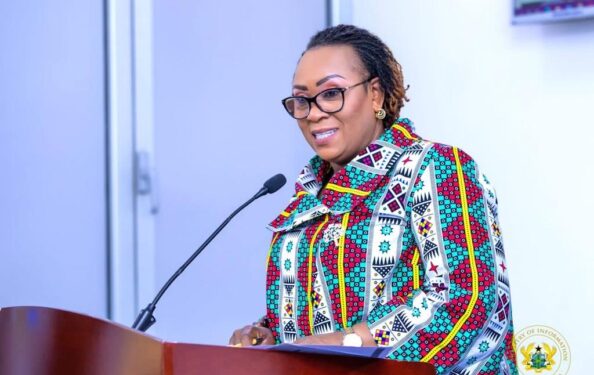 President Akufo-Addo has appointed the Minister for Fisheries and Aquaculture, Mavis Hawa Koomson as Caretaker Minister for the Ministry of Food and Agriculture.

This follows the resignation of Dr. Owusu Afriyie Akoto.

In a press statement issued by the Presidency on Thursday, January 12, Director of Communications, Eugene Arhin said the MP for Awutu Senya East will supervise the sector until a substantive replacement is made.

According to him, the President has also accepted the resignation and was grateful for Mr. Afriyie Akoto’s service to the government and the nation.

On Tuesday, January 10, the Minister for Food and Agriculture, Dr Owusu Afriyie Akoto tendered in his resignation letter to President Akufo-Addo.

JoyNews Presidential Affairs correspondent, Elton Brobbey, in an interview on NewsNight on Joy FM, Tuesday said the Minister had a meeting with the President after which he submitted the letter.

According to him, the President accepted Dr Akoto’s resignation and wished him well in his endeavours.

Sources say this is to enable the former Agric Minister concentrate on his presidential ambition.

Dr Afriyie Akoto is one of the NPP stalwarts eyeing the flagbearership position of the party for the 2024 elections.

Apart from him and Mr. Alan Kyerematen, Mr. Kwabena Agyapong, Mr. Kennedy Agyapong, Mr. Joe Ghartey and Mr. Boagye Agyarko have all declared their intention to contest the flagbearership of the NPP.

Meanwhile, the party is yet to come out with a date for the presidential primaries.

Speaking on the same show, Henry Nana Boakye, National Organiser of the NPP said a date will be set for the election “in accordance with our constitution.”